The railways are my life. I started as an apprentice and stayed until I retired. I was able to build a fine career, but more importantly I was able to drive the trains. What a wonderful feeling of freedom that was!

I was born in 1932 and went to work for the NMBS/SNCB when I was 15. I began as an apprentice in Cuesmes. And that was a lot tougher than you might think. The days were long and strenuous. Each week there were 24 hours of lessons and 21 hours of practice in the workshop. That's where we made models of goods trains to learn how they worked. Some of those models are now in Train World. I'm still proud of them when I see them there. They were made down to the finest detail. When the long days were done I also followed evening classes, and I even had lessons on Sunday morning. It went on like this, week in, week out, for 3 years. We worked long hours and it was arduous, but it was worth it, because we learnt a lot.

The biggest disadvantage was that we hardly ever had a break. We got started at 8 am and went straight through until noon, without a break. It was tough for a boy of 15, getting up so early and then working for four hours non-stop without even getting a bite to eat! At the time I was really envious of the stokers on the steam locomotives, who I saw through the window on their 10 o'clock break eating their sandwiches. That's when I decided “that's what I'm going to do”!

From stoker to driver

In 1951, when I was 19, I passed my exams to become a stoker. I was taken on at the Saint-Ghislain depot, where I worked on type 16 steam engines.

The stoker was not the one to drive the train. That was the driver. No, the stoker looked after the fire. That may seem like nothing to you, but there's quite an art to making a good fire you know! By putting more or less coals on the fire you increased or decreased the pressure in the steam boiler, thus making the train go faster or slower. We also helped the driver maintain the locomotive and carried out small repairs. When the weather was bad and you could hardly see a thing, we also helped to keep an eye on the signals.

Once, when I drove the royal train Queen Fabiola asked me “C’est vous le chauffeur?” and King Baudouin answered “Non, ce n’est pas le chauffeur, c’est le machiniste”. Hmm, it was rather confusing in French because, in railway terms, ‘chauffeur’ means stoker and not driver.

After doing my military service as para-commando I began working at the depot in Mons. Here I was able to be the stoker on quite a number of different steam locomotives, including the types 29, 40, 53, 51 and 31.

It was an interesting period to be working at the railways. At the time things were steaming ahead... from steam to diesel and electric. I really wanted to operate the train myself and it seemed best to learn how to drive all three types of traction. So, after four years working as a stoker in Mons, I passed my driver exams for steam, diesel and electric engines.

When I came home my wife always knew which type of engine I'd been driving that day. If I had black rings around my eyes she knew it was a steam engine. If I hadn't managed to eat all my sandwiches then it was the diesel. That's because the smell of diesel got into your sandwiches and they then tasted quite revolting! If there was nothing at all to be seen or smelled then it was the electric one. It didn't bother me either way, because I loved them all!

Long days, hardly ever at home

As an apprentice I had become used to working hard, and this did not change when I became a driver. I sometimes worked for 3 months without a single weekend off. I didn't complain because I loved my job. My view was: I chose this job myself, no-one ever forced me into it. In that case you have to take the good with the bad. And anyway, in my opinion, there were far more advantages then disadvantages!

When I got married, I said to my wife: “Look, let's manage with what we've got. I'd rather you stayed at home.” Those long days and irregular hours at work... Whenever I had the early shift I went to bed at 6 pm and got up at 2 am. If my wife had a daytime job elsewhere, we would never have seen each other.

However this still wasn't an ideal situation. It was what encouraged me to go back to my studies and progress up the hierarchical ladder of the National Railways more quickly. It would give me more time with my familiy and allow me to earn a bit more.

I just loved to drive trains! I particularly enjoyed the freedom and independence of it. As a driver you are master of your engine. But after a while the combination of this job and having a family life just didn't work anymore. I therefore decided to go for a job as instructor. I passed my instructor's exams for electrical traction and later I even became chief instructor.

I did miss the freedom of being a driver. But I was happy because I got to see my wife and children far more! Luckily, I was able to accompany new operators during their first trips. In that way I still regularly had the chance to spend time on my beloved locomotives.

King Baudouin on board!

I have many wonderful memories, but driving the royal train has got to be one of the best. On the occasion of Belgium's 150th anniversay I was allowed to drive King Baudouin's train. What a kind man! He actually came to apologise because, when the train staff was being introduced, he had addressed me in Dutch instead of in French. 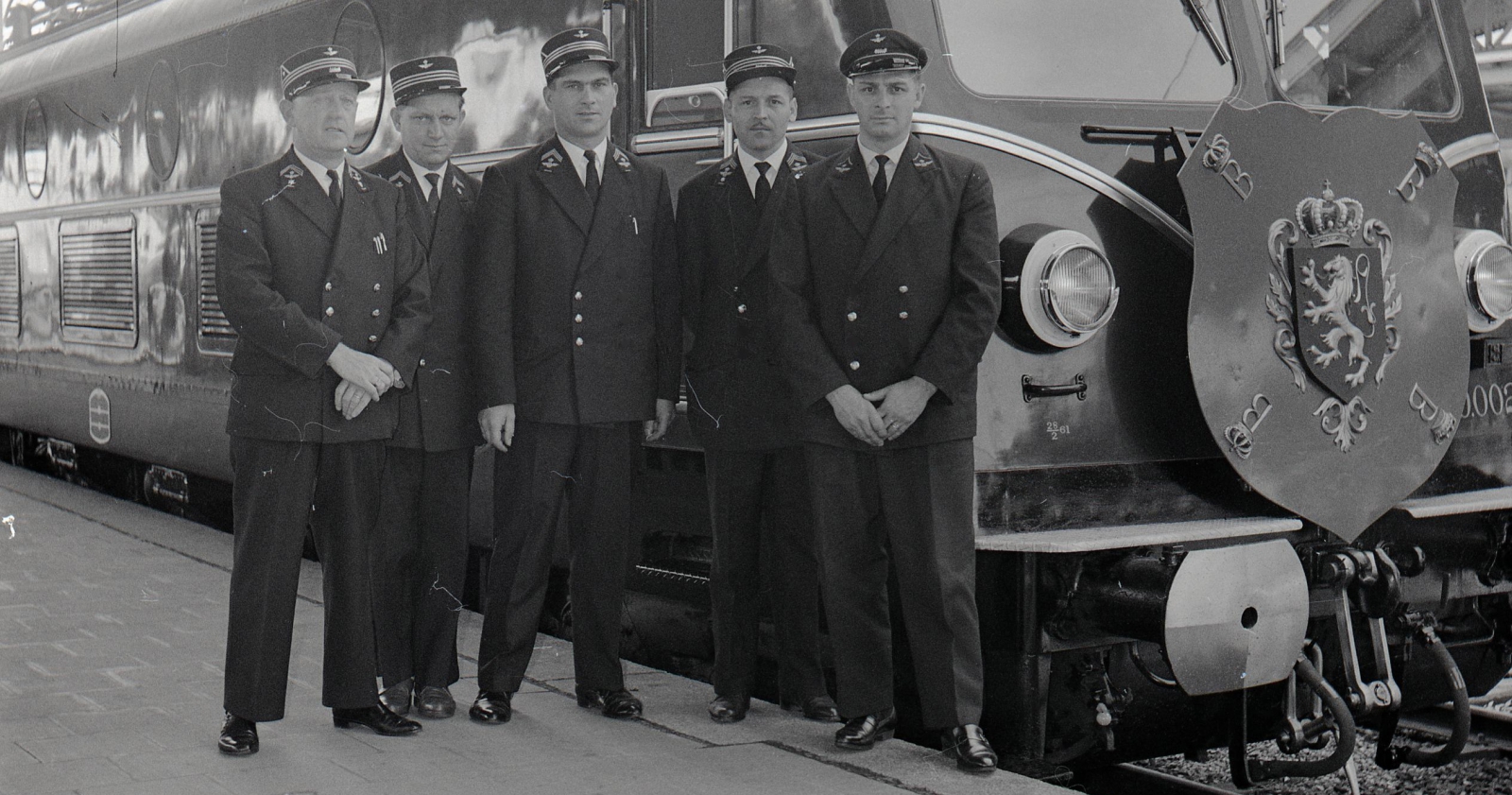 These occasions were very strictly regulated. According to protocol it was forbidden for the king to enter the driver's cab. One time the staff literally had to bar the way to stop the king from climbing into the cab.

It wasn't just the once. It seems they were quite happy with me! I was asked to drive the royal train several times: for a family visit to the Grand Duchy of Luxembourg and a number of times when foreign kings and queens visited Belgium, including the very last trip in the royal train in 1976.