I'm now 77 years old and I look back at my fine career at NMBS/SNCB, with a feeling of hapiness and satisfaction. I began working in 1953 as an apprentice. I was training to be a station master and, in the meantime, I was also a messenger boy. It was my job to deliver the letters and parcels with priority stamps from the station where I worked to their adressees. The railways had their own parcel service at the time. I also took round the more important telegrams between two stations. All this had to be done by bike! 10 years later I became a station master of rank 4 and I held this job for over 30 years, until I retired.

Living in a station

During all those years I lived with my wife and children in a station. It may sound quaint, but it was really quite comfortable and very cheap! It was a compensation for being on call, even at night. Some electricity and quite a lot of coal was supplied for free too. The coals were delivered to our door by a special goods train. An advantage of living next to the tracks! NMBS/SNCB also carried out any repairs that had to be done to the house.

I regularly changed stations during my career. I was station master at Waarschoot, Sinaai-Waas, Drongen and lastly at Landegem. This meant we had to move house every time, but that went quite smoothly really. All our belongings were simply put into two goods wagons and transported via the railway!

Our time in Drongen, near Ghent, was perfect for the family. Our children could get to school easily and everything was nearby. But most of all I loved the station at Landegem, mainly because of the overall atmosphere and working conditions. So I was really happy to be able to stay there until I retired. One day I received the proposal for the position of assistant station master of rank 1 in Antwerp. That would have been a big promotion, but I preferred to remain in my lovely Landegem.

A typical day of a station master

As station master I carried out lots of different tasks. I sold tickets to passengers, kept an eye on train traffic and warned dispatching in case of delays. 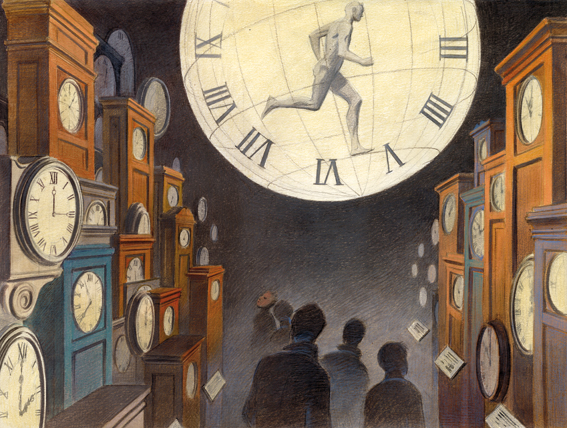 Of course I did everything I could to keep delays in my station to a minimum. It was therefore really important that trains arrived and departed on time. That meant that the station clocks had to be aligned and show the right time. When I was station master I received twice daily a phone call to align my clocks with the master clock. It's hard to imagine now, but in those days it didn't all just happen automatically.

At the time the station also had a goods yard. Sometimes a goods train made a stop and we had to couple or uncouple some wagons. Often there wasn't a lot of time. In Drongen, for example, there was no side track, so shunting had to be carried out when there were no passenger trains coming through. Needless to say we had to be quick!

Technology in those days

We had to report every passing train to the next station on the track. This was done by the signal man in the signal box. This was located in the station and so it was up to me to make sure it worked properly.

Trains started coming through from around 3 or 4 o'clock in the morning. Normally the signalman working the early shift would be there already. Occasionally the signalman was late or absent. In that case I was called out of bed to replace him!

I do remember, during my time in Sinaai-Waas, all of a sudden something really modern was being installed in the signal box. It was a relay-logic desk with a visual control panel. Thanks to different relays along the tracks, this signal box knew exactly where the trains were and when they would pass through the station. The signalman could follow it all by the lights on the control panel. That was really a great step forward and much safer!

These days train traffic is controlled by centralised Traffic control Centres. That's why pretty much all local signal boxes have been closed. It's probably the signalling that has undergone the most significant changes. From completely manual to just about fully automated systems.